Do we need digital rites, and how can we shape them? Are our digital experiences translating into embodied memories? These are the questions raised during the week from 6 to 9 September 2022, dedicated to the Doctoral Summer School Digital Rites and Embodied Memories, a milestone of the EU4ART_differences project.

A group of young researchers and professors from different European capitals met in the Monastery Casa San Silvestro in Monte Compatri, a convent and a corner of unspoilt nature a few kilometres from Rome. In this bucolic and spiritual frame, an intensive programme curated by Professor Franco Ripa di Meana for the Work Package 4 of the Project was held, alternating webinars, workshops, and moments for sharing individual research. Day after day, participants’ individual experiences and researches came together in a choral ritual divided and symbiotically connected between physical and virtual space. 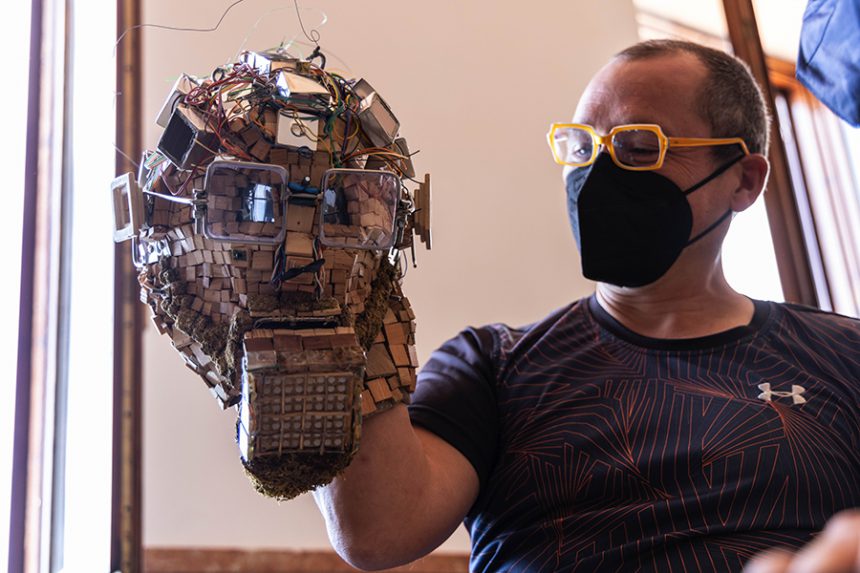 Creativity at the Crossroads of Neuroscience, Artificial Intelligence, Gaming, Alternative Economies and Humanism were discussed by voices of eminent scholars active on an international scale, as well as by young European project researchers, like those from the Digital Form Creation Lab of the Hungarian Academy of Fine Arts, and the INOUT collective from the Academy of Fine Arts in Rome. These online meetings were conceived to be open to the public, extending the discussion to experts and non-expert audience in order to create debate and exchange of perspectives. Many people from various international museums and universities registered to participate from distance, counting about 200 contacts from New York University, MAXXI, Moholy Nagy University of Art and Design, Parkview Museum, and other renowned institutions.

A series of workshops were organized during the afternoon hours involving the participants in several collective activities with leading artists and activists from the international scene, experiencing a rituality that was also physical.

During the first workshop, Marie Stine Jacobsen, a conceptual artist with a long experience in systems of surveillance and mass control, led the group to experiment forms of Group-Think and collective intelligence through the body and its languages. 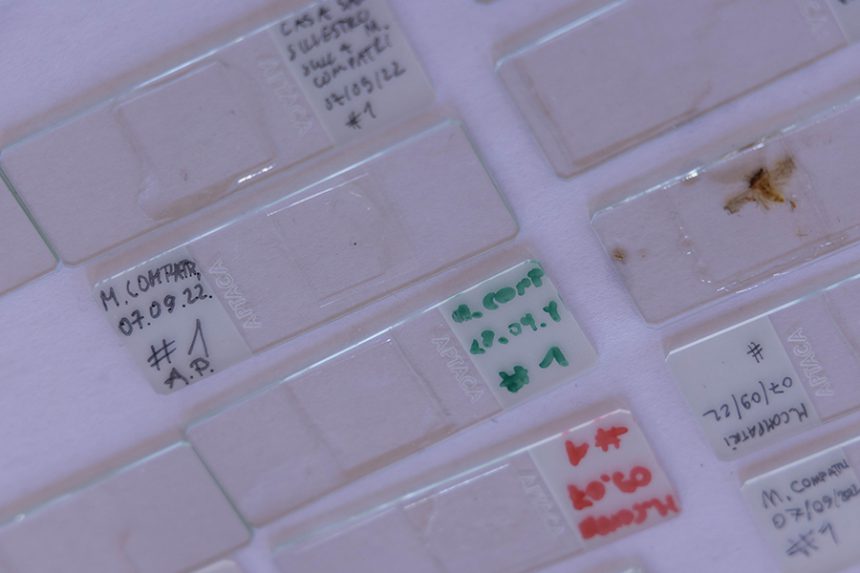 On the second day, thanks to Cinzia Pietribiasi, the researchers shifted their focus from the human body to the air’s composition. Pietribiasi invited the group at the Monastery to actively contribute to The Critters Room project by equipping them with a kit for sampling invisible particles of the air. Some of these Critters Kits were given to students living in different cities, allowing the project to continue over time and building a community network for collecting environmental data across Europe. 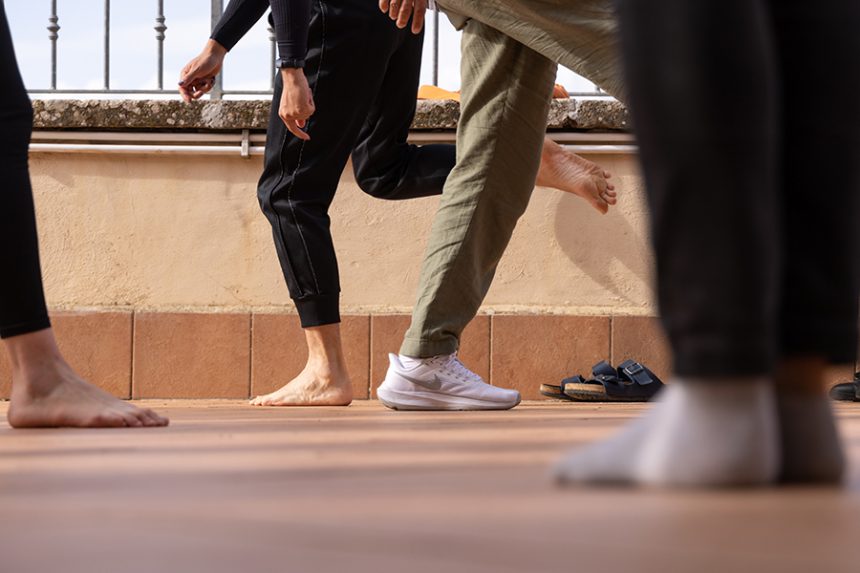 In the third workshop, the presentation of the Zurich F+F School’s online archive with Michael Hiltbrunner was preparatory to a series of exercises that involved the students and professors in an experiential exploration of the F+F School didactic approaches, which were strongly performatives with radical and political implications. 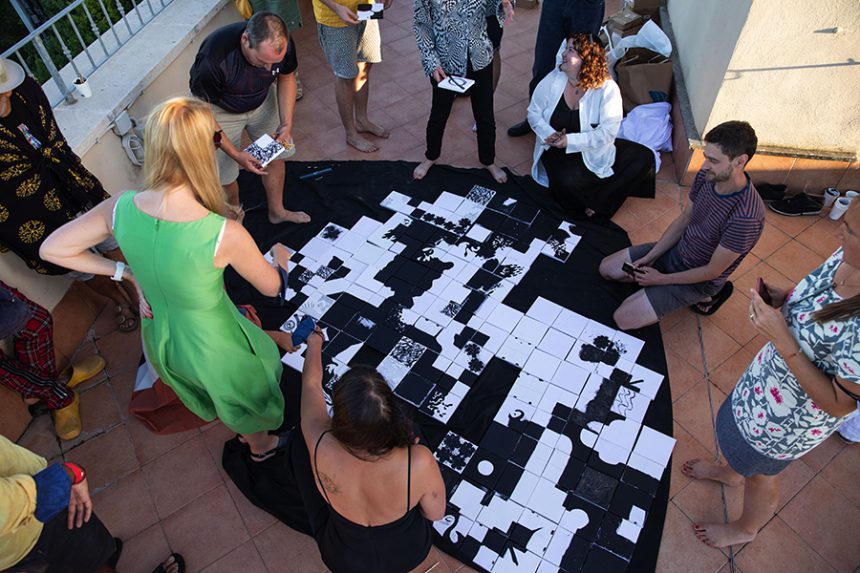 The series of workshops concluded with The Modular Brainstorming by Luigi Pagliarini, an investigation on relational modularity through a workshop that made use of the Pagliarini Code, a tool created by the artist to be applied to two and/or three dimensions for designing functional forms. The work of each participant, consisting in a group of six canvases with black and white colors painted according to the rules of Pagliarini Code, merged into a collective installation, a sublimation of intelligence and experience in a co-working operation. 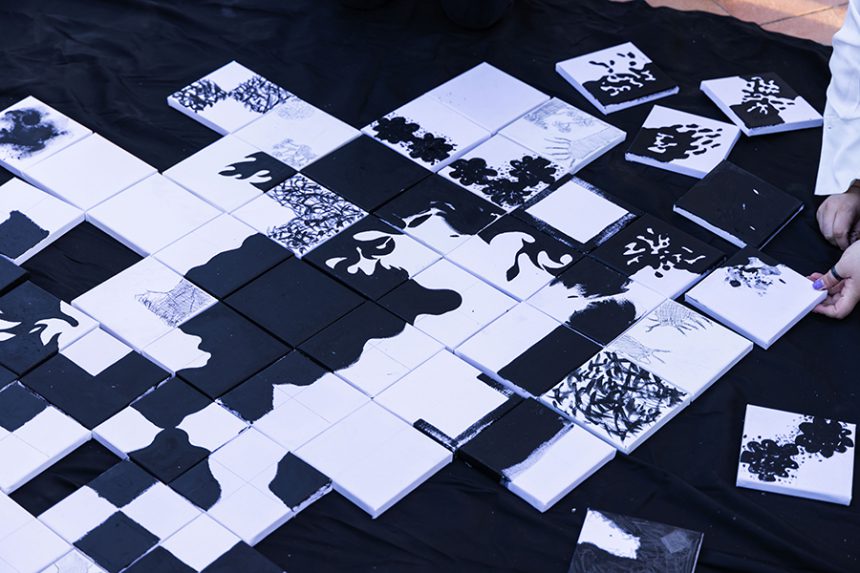 Other activities that aimed at reflecting on the research questions of the Doctoral School were organized. Two digital environments called Bosco and Sala, that reproduced respectively the exterior and interior spaces of the Monastery were developed by h.Art, a collective of former students of the Rome Fine Arts Academy, to  create a virtual exhibition space where each researcher’s work could be exhibited, and thus move towards the experience of the hybridization of space. 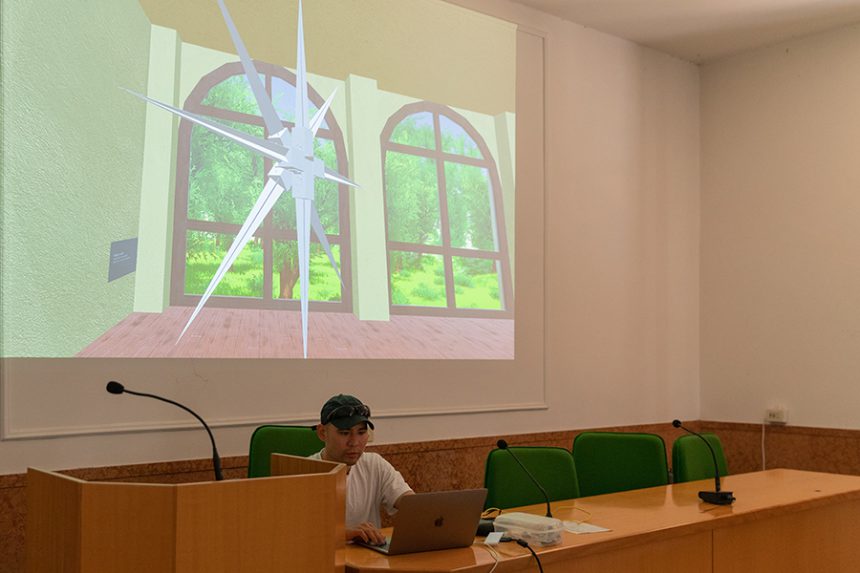 Daily ritual moments were scheduled by yoga activities, led by junior scientist Cinzia Pietribiasi in the early hours of dawn at the Monastery, and online activities on the Research Catalogue. On this platform, an international tool developed for teaching and publishing artistic research, every day researchers left traces of their thoughts related to the topics discussed by Digital Rites and Embodied Memories, following the monastic daily schedule (Multa Nox, Prima nox, Prima Vespera, Meridianum tempus, Primo mane). The construction of a collective memory of the Summer School in the digital space returned to the physical experience when its sudden cancellation forced, as the next step, a reworking through each person’s biological memory. 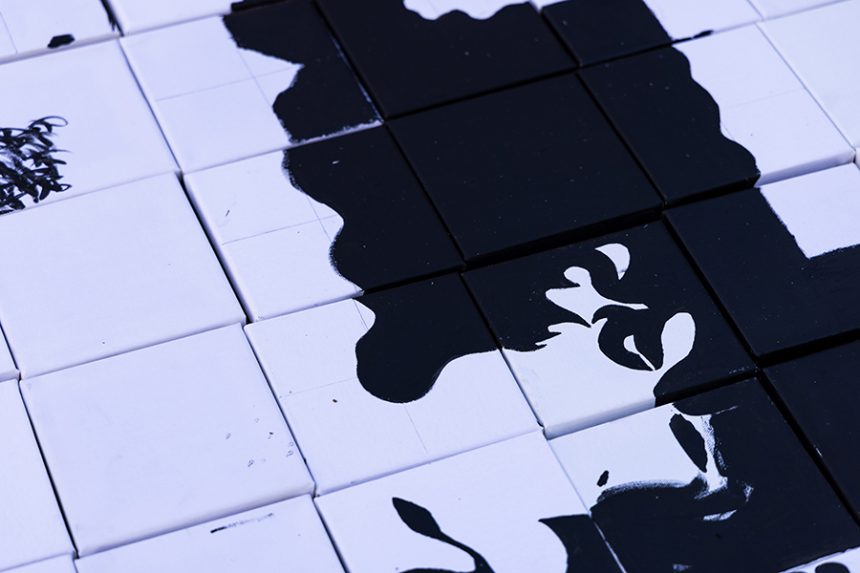 The Summer School was a crucial moment for gathering the first results of the European Project, and for the identification of point of strength on which the path of EU4ART_differences will develop during the upcoming year. The important collaboration started with the Society for Artistic Research (SAR), the new tools adopted, as well as the new figures of researchers and junior scientists, have contributed to art practice based upon collective laboratories, and to the building of a common research environment, which constitute the pivotal aspects on which the Project will focus in the subsequent phases. Furthermore, the ‘differences’ that shape the European project EU4ART_differences reach with the Doctoral Summer School a catalyzing moment for international reflection on the meaning and role of artistic research, especially in the perspective of a community re-launch of the third cycle studies in the arts.

The Doctoral Summer School: Digital Rites and Embodied Memories, art of the project EU4ART_differences took place at Casa San Silvestro, Monte Compatri (RM) and online, September 6 – 9, 2022. In this context, EU4ART_differences inaugurated its portal on the Research Catalogue, a research tool used by artists, researchers and Professors, launching the important collaboration recently established between EU4ART_differences and the Society for Artistic Research (SAR).

Please download here the press release for the talks open to the public, here the flyer for the online morning lectures’ complete program and links for registration, here the program with authors’ abstracts and bios, and here the web brochure dedicated to the SUMMER SCHOOL. 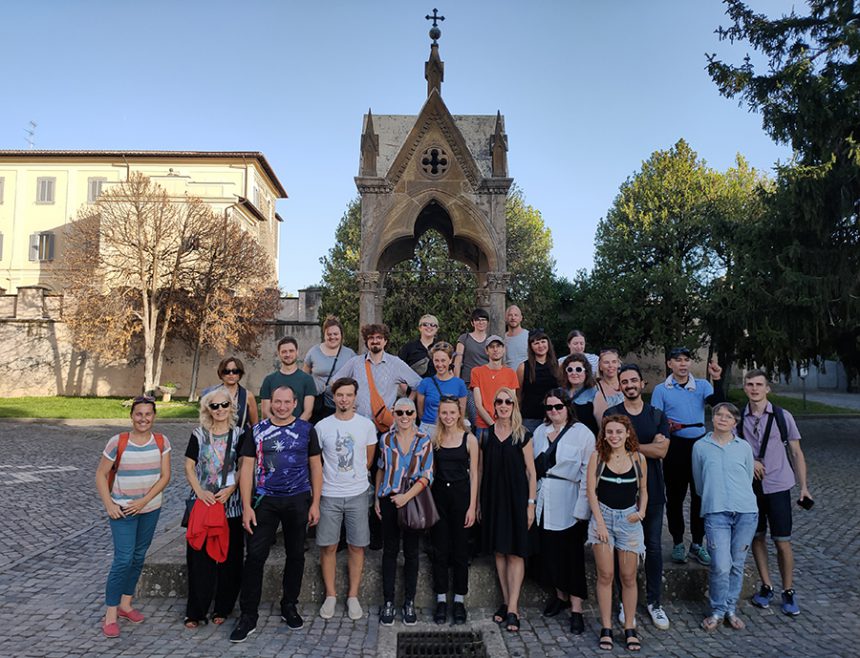 Rasa Smite and Raitis Smits talk about their new media and cross-disciplinary work. Since the mid-90s, Smite and Smits have…

At the 19th edition of International Conference CELDA (Cognition and Exploring Learning in the Digital Age), on Wednesday 9th N0vember…